"Finally someone people will have heard of" was how my editor described the opportunity to interview True Blood's Stephen Moyer in his email. I'd never heard of him. I only knew of True Blood from tube station posters advertising the fact it was showing on the FX channel on satellite.
Time to do some research.

Having no knowledge of this man actually made the preparation and question conjuring process easier. Not only was I thinking of off topic and irreverent/irrelevant areas because I didn't know what was on topic, but I also felt empowered by the fact that he was a nobody (to me at least). Inevitably, the more I learnt about him the more difficult this became, especially after I watched the first episode. For one thing it made my "What is True Blood?" trick question not a trick question. It removed the comedy angle, but I felt it served as a good introduction for normal terrestrial TV viewers, and was a decent segue into the rest of the interview.

Soon after tweeting a request for questions to this seemingly unknown, I received a number of emails from his very observant fan club, as well as a number of new True Blood affiliated followers. I visited the fansite one of the emails referred to, it was a closed community so I requested membership. In doing so I had to reveal who I was, and agree not to exploit the members. This didn't fail to amuse me considering how fervently and ferociously I've seen die hard fans defend their beloved idols.

As we have discovered with Robert Pattinson, a sure-fire way to ensure traffic to your website is to aggravate ardent and loyal fans. The Stephen Moyer fan club named 'Billsbabes' after his character in True Blood, dropped the opportunity into my lap. Too many people seemed to be getting hold of my email address via that fansite so I asked them to remove me from the membership list. This was met with some concern, but I wanted to avoid a deluge of mail from upset crazy people.

My 'master' plan was to convince Stephen that Billsbabes was originally a Bill Pullman fan club, and the members had merely switched allegiance. In the cold light of day this doesn't seem very funny, you'll just have to trust me when I tell you that it is, ok?
While my memory of the day is a little hazy, I seem to recall wanting to extend my habit of having a drink to calm my nerves beforehand. This resulted in drinking scotch from a hip flask on the train to London, which, at the time, felt like a shameful act.

It was my first time at the Channel 4 building and I must admit that the occasion wasn't lost on me. I arrived 5-10 minutes early and was passed from publicist to publicist around 4 times like stoners sharing a joint. I was eventually told that I had to wait while Stephen got through some telephone interviews. This seemed to go on forever, possibly because I had to wait with one of these publicists while the Moyer finished up. Conversation turned into an awkward silence very quickly.

When one perceives themselves to be in the business of subverting interviewees as I did, or do, publicists and PR agents become a professional enemy. That's not to say that there shouldn't be a level of hostility between the press and press officers anyway, but I'll address that in a future post. In the defence of the guy I was left waiting with, he is one of the more human-esque publicists I've met, and he cooed over Stephen the least.

My number was called so I went in to set up my camera etc. Stephen came back into the room moments later and spoke with quite a thick Essex accent I thought, it dissipated incredibly quickly however, especially once the interview began. 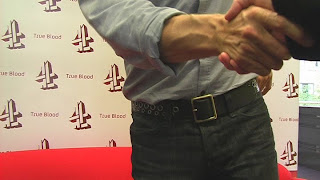 After he answered my opener by explaining what True Blood was, he asked me if I'd seen the show. While I had seen the first episode, fawning over a celebrity who is basically just promoting a product is highly undesirable as far as I'm concerned. I decided it would be funnier to answer negatively. After watching the video of the brief exchange and resulting expression on his face, I'm glad I did.

He took my semi-mocking questions in a much better spirit than I had probably intended when writing them. When penning my question about researching the role I wanted to press the similarity between vampires and prostitutes in a much more malevolent manner than I managed to summon in practice. This was partially because he seemed quite amused by my mention of a brothel and wanted to make a joke along those lines himself, thus interrupting my comparison, and also because by this stage I'd come to think he was a decent individual.

Then came the ruse, it took some persistent insistence but he appeared to believe me, even stating his surprise when the interview had concluded, "I didn't know about the Bill Pullman thing." A slightly more sceptical publicist from Channel 4 asked for more details, but at this stage I just repeated what I'd said earlier as I was distracted by packing my equipment away, and a swooning woman from Heat magazine was already in the room.

There's always a small team of people who hover just out of sight in order to listen in to these interviews. They never really acknowledge this fact, but it's pretty clear from their frosty behaviour towards you afterwards that it occurs.

In the lift down to reception I sent a text to my editor telling him that I felt immense guilt for being a bit of a bastard towards Stephen in the interview. That feeling continued for some time afterwards; I even stopped to give a confused looking tourist some directions to allay my conscience.

To this day I'm not really sure if I feel proud of my behaviour towards this unusually grounded and decent celebrity, or still ashamed and guilty. I'm told that my questions are now something of a legend in the office of the PR agency that arranged the interview, that's something I suppose. 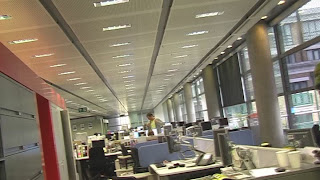 This all happened at the beginning of October last year, I've waited this long to write about it through a mixture of procrastination and a desire to let the dust settle on all those fan comments. The YouTube comments in particular managed to coerce me into breaking my rule of refraining from replying. I met them with a mixture of heavy sarcasm, light sarcasm, mocking, and honesty. The majority of the comments on fansites revolved around something I was reluctant to reveal the answer to at the time, and that was whether it was intended as a joke or not. Well yes, basically, it was.

Go watch the product of all this ridiculousness here.
at 12:09 pm

Email ThisBlogThis!Share to TwitterShare to FacebookShare to Pinterest
Tags: behind the scenes, Channel 4, Hecklerspray, Moyer

Keith can also be found at...

You can email me: keith[at]nightstemplar.co.uk